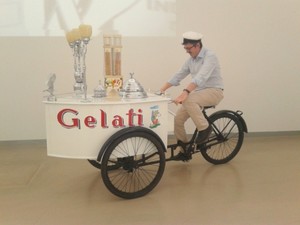 The Carpigiani Gelato Museum has been enriched with a new, important element, witness and protagonist of gelato history: the gelato cart.

Maria Giulia Magli, Beta, and Fraufa have donated a gelato tricycle from 1938 to the Carpigiani Foundation. It was delivered to the museum on 29 October 2013.

THE GELATO TRICYCLE
The cart, connected to a tricycle, was made by the Giovannini company of Faenza, a specialist in the business.
The Impero style tricycle is equipped with a carbide lighting system and two tubs: one for storing gelato and the other for holding spatulas and scoops.

Gelato Carts in History
Thousands of gelato street vendors invaded the cities of Europe and America. The dessert was added to the menus of bars and restaurants. If the customers didn’t go into the restaurants, vendors pushed their carts into the streets to ring their bells and sound their horns to attract attention. “Gelato, gelato!” they called, moving into the streets on March 19 of every year, welcoming the arrival of spring.

The Carpigiani site does not use cookies profiling. Technical cookies are used to improve navigation and third-party to collect traffic statistics. More info