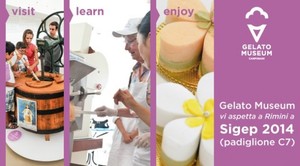 From 18th - 22nd January, the Gelato Museum looks forward to seeing you in Rimini for Sigep 2014, the international exhibition for the artisan production of gelato, pastry, confectionery, and bakery.

For those who want to spend more than four minutes to learn about gelato’s history, the museum has scheduled extended hours throughout Sigep, with the possibility of participating in guided tours without a reservation.
The museum will be open on Saturday, 18th January from 2:00 p.m to 6:00 p.m, as well as Monday, 20th January to Wednesday, 22nd January, from 9:30 a.m to 6:00 p.m (guided tours start every 30 minutes).


The History of Sigep
The first international exhibition dedicated to gelato and pastry was inaugurated on 17 January 1980. Sigep, Salone internazionale della Gelateria e Pasticceria (International Exhibition for the Artisan Production of Gelato and Pastry), made a name for itself from the beginning by combining the usual exhibition of products and innovations with professional initiatives that stimulated those in the trade. This choice has made it possible for the trade fair to become the central point of reference for gelato and pastry businesses.

The Carpigiani site does not use cookies profiling. Technical cookies are used to improve navigation and third-party to collect traffic statistics. More info